What Citizens Need to Know about Open Carry

Prior to January 1, 2016, all license holders were Concealed Handgun License Holders (CHL), meaning handguns must be carried in a concealed manner. After December 31, 2015 the Concealed Handgun License is changing to the License to Carry (LTC), meaning license holders may carry concealed or unconcealed (Open Carry). If a licensee is openly carrying a handgun, the handgun MUST be secured in a belt or shoulder holster.

Effective January 1, 2016, the Texas Penal Code, Chapter 46 will be amended. HB 910, passed by the 84th Texas Legislature, will allow persons licensed to carry a handgun, under Subchapter H, Chapter 411, Texas Government Code, to openly carry a handgun in the same places that allow the licensed carrying of a concealed handgun with some exceptions, provided the handgun is carried in a shoulder or belt holster. That means that Texas license holders can carry openly or concealed in any place not expressly prohibited by law. License holders may be subject to criminal charges for carrying a handgun in plain view unless carried in a shoulder or belt holster.

Examples of belt and shoulder holsters

Generally, What Places Can a License Holder NOT Carry a Handgun? 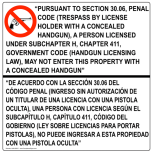 In a nutshell: Those persons that are licensed to carry a concealed handgun, may carry that handgun openly in a belt or shoulder holster starting January 1, 2016.

Do I call 911 if I see someone with a handgun? It depends…

Thank you to Cpl. Proctor for sharing this information. He is the Problem Solving Team Supervisor and head of the Sex Offender Compliance Unit in Cleburne, TX. He is also a firearms training instructor in North Texas.

This entry was posted in Be Informed!, State News, Uncategorized and tagged Be Prepared, Pearland Connection, State News. Bookmark the permalink.