One of Houston’s historic locomotives waits for permanent home

Posted on December 4, 2017 by StaceyD | Comments Off on One of Houston’s historic locomotives waits for permanent home

Before Houston had freeways or overpasses or traffic jams, it had railroads. It had so many railroads in fact, that Houston was for many years known as, “The city where 17 railroads meet the sea.” One reminder of that phrase remains today. Southern Pacific 982, a locomotive donated to the City of Houston, was a fixture in Hermann Park for almost 50 years, reminding us of our past, until progress changed its future.

In 1957, changes were being made to America’s trains. Newer, more efficient diesel locomotives were replacing the steam driven, smoke producing, heavier machines that required their own tender to carry coal and water just to run them. These locomotives were essentially a rolling boiler with wheels, a style that had been in use since railroading began in the mid 1800’s.

Southern Pacific 982 was such a machine. It was built in Philadelphia at the Baldwin Train Works, and by 1920, she was running with Southern Pacific to carry freight on the Texas And New Orleans Railroad, making regular stops between Lufkin, East Texas and throughout Louisiana.

The locomotives of the early 20th century were built to survive 40 years of daily use. World War II brought about the greatest use of railroads in America, having to carry war materials and personnel across America, pulling 100 cars at 50 miles per hour. Because there were fewer automobiles in use at that time, nearly anything that was sent anywhere went by rail.

Locomotives that had long been resigned to “dead tracks,” where they could be stripped of their parts, were instead rebuilt and sent back into service. New locomotives could not be purchased because of the war effort. Southern Pacific 982 was fitted with steam lines to heat passenger cars. Because of these different circumstances, trains were now rolling coast to coast instead of on just local routes, as they were designed for originally.

Newspaper accounts from the Houston Chronicle and the Houston Post indicate that in the following months, several locomotives, including 982, were on their way to being scrapped. The steam locomotives were being replaced by the greatly more efficient diesel power plants. No more billowing smoke; no more coal, oil or water to carry with them. The Houston Chronicle reported that Mr. Ed Teague, the caretaker of the locomotive for many years, said that he saw the 982 in a scrap line and convinced the man in charge to place “Old 982” at the end of the line. Its career had ended after traveling over 3.5 million miles! Peter Whitney, a train buff, appealed to the City of Houston to save one of the old engines as a icon of Houston history, but was met with a “no funds” response.

The idea of saving SP 982 was presented to the Houston Junior Chamber of Commerce, or Jaycees. This sounded like their kind of project, since they had undertaken things like this before. An estimate of the cost of moving the locomotive was prepared in January, 1957, in the amount of $2,540. Negotiations with Southern Pacific were positive, but talks with the City of Houston proved more difficult. Mayor Oscar Holcombe was against placing the locomotive in any park because it posed a liability problem. The councilmen were generally in favor of the idea, but they couldn’t decide where to put it. Memorial Park and Hermann Park were debated as sites by City Council, and in the press. Eventually, Hermann Park was chosen since it would provide a more secure location. The necessary motions were passed by City Council while Mayor Holcombe was out of town. 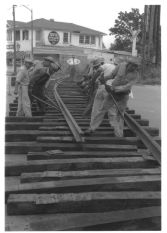 In May 1957, it was decided to move the engine and tender into Hermann Park down Fannin Street from the crossing at Blodgett, where the Southwest Freeway (Highway 59) crosses today. Called, “Operation Choo Choo,” sections of track were laid down and the engine was pushed along until the next section of track was in place. The Houston Chronicle reported that it was a hot week in May to move a heavy engine, and the tracks kept sinking into the hot asphalt. It took the efforts of two tractors to keep the engine from falling over. This went on for a week until Southern Pacific 982 finally arrived at Hermann Park.

On June 2, 1957, the old locomotive was dedicated to the City of Houston. The engine was presented by B.S. Sines, Vice President of Southern Pacific Lines, and was accepted by Mayor Pro Tem Louie Welch. The Houston Chronicle reported that seven former engineers came to see her in her new home.

J.R. Glass said, “She used to go 100 miles on a tank of water. I’d get up at 2 A.M. go to the roundhouse, fire her up, and head for New Orleans.” The oldest retired engineer present was W.K. Larkin, 82, who thought Old 982 was once the most modern power plant on the railroad.

Fast forward to the summer of 2005. It was time for Hermann Park to go through some changes. The Hermann Park Conservancy, with the City of Houston, would transform the area near the lake into the Hermann Park Cultural Plaza, with a café, a covered plaza, and public art pieces. The miniature train that had carried kids around Hermann Park since the mid 1950’s would also be upgraded. That meant that SP 982 would have to move. The Houston Jaycees once again stepped up and hired Barnhart Crane and Rigging, a company with 36 years experience moving heavy equipment.

In August, 2005, the engine was attached to a giant hydraulic gantry assembled over it to lift a combined weight of 199 tons between the engine and the tender. Slowly, SP 982 was lifted up six feet, and a long 120 wheel trailer rolled in under it. Two days later, the tender and the engine rolled out of Hermann Park on separate trailers.

“There’s a lot of different ways we will use tonight to get downtown,” said Richard Davenport of Barnhart. “If it’s a four mile trip the straightest way, we may go 14 or more miles to get it there.”

After crossing a route through the night on 20 different streets in east Houston, on a clear Saturday morning the engine and tender arrive at their new home on Avenida De Las Americas at Capitol, right between Minute Maid Park and the George R. Brown Convention Center.

“Operation Choo Choo II” had arrived. Again, Barnhart had assembled its 800-ton hydraulic gantry over new tracks, and train buffs from the Texas Railroad Preservation Association helped guide the engine and tender down into their new home.

Operation Choo Choo II was a true community effort. Over 100 financial donors and individuals combined to make the preservation a success. The History Channel taped the move of SP 982 for their “Mega Movers” series. Now baseball fans had something new (Minute Maid Park), and something old! Southern Pacific 982 had made a complete circle in 48 years, from Union Station in the 1920’s to Hermann Park, and back near Minute Maid Park, which is where Union Station used to sit.

Now the once proud Southern Pacific 982 sits all alone, wrapped in white plastic to preserve her new coat of paint, missing her coal tender, which was sold off to the Heber Valley railroad in Utah. Here she waits, along with two turn-of-the-century houses that were original to that area’s “Quality Hill” neighborhood.

“We’re working with the Houston Jaycees to deed it back to them, and negotiate a permanent home for the locomotive,” said Carolyn Campbell, communications director with Houston First Corporation, which manages the entertainment and convention venues downtown. “One of the old houses has been adopted by Annunciation Church next door. As to the old Cohn house, some options for that and the locomotive are still being worked out.”

Along with the Astrodome, the history of Houston’s historic icons is waiting for progress. It’s sort of a slow replay of “Back To the Future” for Houstonians.

Chris Daigle is a contributing editor to The Grapevine Source. He is a Houston historian, specializing in Astrodome history. To contact Chris, email blue69@att.net.

This entry was posted in Chris Daigle, Houston History. Bookmark the permalink.