[Editor’s Note: Yes, this is satire, though the photos aren’t! Enjoy!]

Famous Houston photojournalist Chris Daigle is seen out and about in Houston social life these days, never stopping his whirlwind tour of the famous and the influential.

The Source caught up to “Deadline Daigle,” as the New York Times put it, on a recent swing through the Bayou City for his stage play, “Where’s my Pulitzer?” Fans stood in line all day just to see him.

“Wow! He’s going to be right here!” said former Oiler quarterback Dan Pastorini. “I hope I get a picture with him!”  Dave Ward, a fixture of Houston news for five decades, said that he wouldn’t miss meeting Daigle for the world. “I just hope there’s donuts there, ’cause I’m camping out for this!” He also commented on his longevity on Houston’s ABC 13. “When I started in news, the Dead Sea wasn’t even sick yet.”

By special arrangement with his security detail, both Dave Ward and Dan Pastorini did indeed get a selfie with Chris Daigle. “Now I can die happy! My bucket list is complete,” said Dave Ward, now 79.

Way to go Dan and Dave! 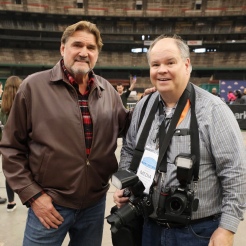 Chris Daigle is a Houston Historian and a regular contributor to The Grapevine Source. He may be contacted at blue69@att.net.

This entry was posted in Houston News, Satire. Bookmark the permalink.