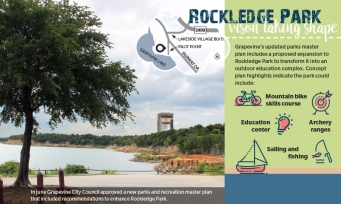 The Grapevine Parks and Recreation Department is working to transform one of its parks into an area for outdoor enthusiasts of all levels—an estimated $50 million concept officials say is the first of its kind in the U.S.

In June, the Grapevine City Council approved the parks and recreation department’s updated parks master plan, which lays out the vision for Rockledge Park to potentially feature a variety of archery ranges, which would be the primary focus of Rockledge Park, Kevin Mitchell, Grapevine parks and recreation director, said at an Economic Development Partnership meeting in March. Other elements included in the concept plan are shooting ranges, marine activities and a mountain bike skills course, along with educational components.

The park is still conceptual and has not gone through the actual construction design phase, meaning park elements could change. Mitchell said this expansion is planned to be a joint partnership between the city of Grapevine and the Texas Parks and Wildlife Department and the U.S Army Corps of Engineers.

This entry was posted in Family-Friendly Activities, Grapevine, Parks and Rec. Bookmark the permalink.