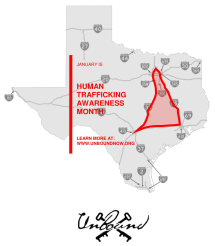 The heaviest trafficking areas in Texas (Courtesy of UnBound)

January is National Human Trafficking Awareness Month. Texas has one of the most heavily traveled trafficking routes in the country, with I-45 and I-10 being the top two. What is human trafficking? Read below from UnBound, an organization formed to combat this awful practice,

And it’s worse today than at any point in history. Slave labor, child soldiers and commercial sexual exploitation are just a few forms of modern-day slavery. And the numbers are staggering.

There are nearly 30 million slaves worldwide.

And in the United States alone, as many as 300,00 children are at risk of being commercially exploited in sex slavery each year. Victims are usually deceived by traffickers who offer a better life or a better job. And once they have victims in their grasp, traffickers use false promises, manipulation, threats or debt bondage to keep their victims under control. To learn more about human trafficking in the United States, visit polarisproject.org or request an UnBound training.

Victims are trapped and hopeless.

In addition to little or no pay, slaves often suffer in torturous conditions where malnutrition, sleep deprivation and abuse are rampant. Victims of sex slavery suffer the contraction of preventable diseases, dehumanization and intense emotional and physical trauma. These victims often become prey to a physical and psychological evil they can never escape alone.

For more information or to find out how to help, visit https://unboundnow.org/.