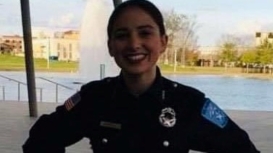 A 23-year-old Beaumont, Texas officer was killed early Sunday in a crash caused by a driver going the wrong way, police said.

Beaumont Police Chief James Singletary said two of the department’s officers were going northbound on Cardinal Drive near Highway 347 at around 2:30 a.m. when their vehicle was hit head-on by a Ford Mustang going southbound.

Officer Sheena Yarbrough-Powell died from her injuries, while her partner was treated for “severe” injuries at a hospital. The surviving officer faces a “long road to recovery” after being released from the hospital, Singletary said.

This entry was posted in Community Losses, Police News. Bookmark the permalink.