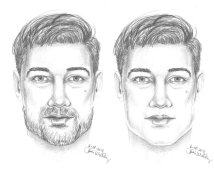 The Grand Prairie Police Department is actively investigating an incident involving a police impersonator who stopped a female driver and sexually assaulted her during the encounter.

On Saturday morning at approximately 1:00 A.M., a female motorist was pulled over in the 4000 block of East Jefferson by what was described as a black SUV equipped with red and blue lights around the front fender.

The impersonator directed the victim to the backseat of his vehicle where he then sexually assaulted her.

The impersonator is described as a Hispanic male, approximately 25 years old, 6 feet 2 inches tall, weighing 250 pounds with black slicked back hair, a mustache with stubble on his face and thick eyebrows. The impersonator was wearing a black tactical-style uniform with a badge and duty belt.

Anyone who recognizes this composite sketch of the suspect or the described vehicle is asked to call the Grand Prairie Police or Crime Stoppers at 972-988-8477(TIPS). Crime Stoppers is offering a cash reward for information leading to the arrest of this suspect.

This entry was posted in Grand Prairie. Bookmark the permalink.