This summer, Grand Prairie ISD will connect children 18 years old and younger with healthy meals at no cost to the child.

Grab and Go meals for pick up:

Grand Prairie ISD is one of the nonprofit organizations partnering with TDA to serve meals across Texas. Families are encouraged to use these three tools to find a meal site anywhere in the state:

Organizations partner with TDA to serve meals in areas where more than 50 percent of children are eligible for free or reduced-price meals in the National School Lunch Program. Eligible sponsoring organizations include schools, faith-based groups, nonprofit summer camps, government agencies and other tax-exempt organizations. All meal sites must be sponsored by an organization that has a contract with TDA.

Summer food program meal sites help children succeed by providing the nourishment they need to return to school in the fall ready to thrive.

USDA is an equal opportunity provider and employer.

On April 22, the GPISD Board of Trustees unanimously approved an Employee Appreciation Compensation plan that will provide a one-time payment of $1,000 to all full-time and long-term substitutes and $500 to part-time GPISD employees.

“The Board wanted to express its appreciation not only for what our educators do every day, but also for how they have risen to the many challenges presented by the COVID-19 pandemic,” said GPISD Board President Aaron King.

The Board, which has been discussing this plan since the fall of 2020, was finally able to take action on the plan as a thank you to all District employees. This action takes place just two weeks before the District’s Employee Appreciation Week May 3-7.

“There is no one in our District that has not been focused on making sure our students can continue to learn,” said Superintendent Linda Ellis. “Everyone understood from the onset of the pandemic, that we would have to do things differently. For that we are grateful.”

The Employee Appreciation Compensation plan will begin its rollout during the week of May 3-7.

Living for Zachary, in conjunction with Frontera Strategies, will sponsor free heart screenings for youth ages 12-22 on Saturday, March 13th at the Grand Prairie Family YMCA.

A Living for Zachary Heart Screening is not a substitute for a thorough exam and consultation with a physician. While the screening seeks to detect conditions which may lead to SCA, it does not guarantee all risks of SCA will be detected.

The Grand Prairie Family YMCA is located at 4556 S Carrier Pkwy, Grand Prairie TX 75052. The event will take place by appointment from 8:00am – 5:00pm and screenings will be provided at no cost to families.  Parents must be present for youth under the age of 18.  To secure an appointment for a heart screening, parents and guardians can visit http://studentheartscreenings.com/. Living for Zachary’s Health and Safety Protocol for heart screening events can be viewed here.

About Living for Zachary:

Living for Zachary is a non-proﬁt organization dedicated to raising awareness and preventing sudden cardiac arrest in youth through heart screenings, AED donations to youth-based organizations, and CPR/AED training. The organization was founded in honor of Zachary Schrah, who was only 16 years old when he collapsed during a high school football practice in Plano on April 2, 2009. For more information, visit www.livingforzachary.org.

The Grand Prairie Independent School District Board of Trustees will conduct a public hearing to discuss the 2019-2020 Texas Academic Performance Report (TAPR) as part of its regular meeting on Thursday, February 11, 2021, at 7:00 p.m.

The hearing will be held in the Board Room at the Dr. Susan J. Simpson Education Center located at 2602 S. Belt Line Road in Grand Prairie.

From Carrie to Buffy the Vampire Slayer, monsters and high school have gone together like, well … Frankenstein and Dracula. It can be scary stuff.

As part of a class project, students at GPISD’s Dubiski Career High School played with the idea of what would happen if there was a monster lurking on their campus. That project grew into something much more. As in, feature-length more.

In the 2018-2019 school year, Dubiski Career High School instructors Tyler Case and Brian Blosser took a short-film project and turned it into a full-blown movie-making adventure.

The film, titled “Tardy Terror,” had a budget of $3,000 (with $2,500 of that donated) and ended up taking 65 days to shoot. That didn’t involve editing, post-production, or a worldwide pandemic that slowed – but didn’t stop – the project.

The cast is almost exclusively students though some professional actors, previously brought in to speak to and mentor students, ended up being part of the film as well. Several teachers were also involved as were a number of extras and even some parents. Though most of the film was shot on the Dubiski campus, the crew also used Main Event in Grand Prairie, Hangman’s House of Horrors, and the Gopher-Warrior Bowl. Costumes were made by Midnight Studio Effects and the school’s Architecture pathway even built some of the sets.

The students, and the school, hosted a limited, invitation-only, masked and socially distant premiere at the Studio Movie Grill in the Arlington Highlands on Thursday, October 29, at 7:00 p.m. On Halloween, they had a 24-hour showing of the movie on YouTube.

Their goals are to submit their work to film festivals, get it on Amazon Prime and Vudu, and ultimately market it for sale with money going  directly back into the program so other students may have the same opportunity.

For a look at the film, here are some previews of “Tardy Terror”:

Tardy Terror – The Blast Clip
Behind the Scenes

The Grand Prairie Independent School District is proud to announce that Hobbs Williams Elementary School has been named a 2020 National Blue Ribbon School. Williams is one of only 367 schools across the country to be recognized today by U.S. Secretary of Education Betsy DeVos as a Blue Ribbon School based on overall academic performance or progress in closing achievement gaps among student subgroups.

“We are extremely proud of the students and staff of Hobbs Williams Elementary School,” said Linda Ellis, GPISD Superintendent of Schools. “This award affirms their hard work and commitment to excellence.”

The coveted National Blue Ribbon Schools award affirms the work of educators, families, and communities in creating safe and welcoming schools where students master challenging and engaging content. Now in its 38th year, the National Blue Ribbon Schools Program has bestowed almost 10,000 awards to more than 9,000 schools, with some schools winning multiple awards. Schools are eligible for nomination after five years.

“Congratulations to this year’s National Blue Ribbon School awardees,” said Secretary DeVos. “It’s a privilege to recognize the extraordinary work you do to meet students’ needs and prepare them for successful careers and meaningful lives.”

The U.S. Education Department recognizes all schools in one of two performance categories, based on all student scores, student subgroup scores and graduation rates:

·         Exemplary High Performing Schools – These are among their state’s highest performing schools as measured by state assessments or nationally normed tests.

·         Exemplary Achievement Gap Closing Schools – These are among their state’s highest performing in closing achievement gaps between a school’s student groups and all students.

Up to 420 schools may be nominated each year. The U.S. Education Department invites National Blue Ribbon School nominations from the top education official in all states, the District of Columbia, Puerto Rico, the Virgin Islands, the Department of Defense Education Activity, and the Bureau of Indian Education. Private schools are nominated by the Council for American Private Education (CAPE).

The 2020 National Blue Ribbon Schools Awards Ceremony will be held virtually Nov. 12 and 13.

Only the top 4 percent of districts in the state earned the honor this year.

The Grand Prairie Independent School District has been awarded a 2020 District of Distinction Award by the Texas Art Education Association. TAEA announced the 42 winners of this year’s award for providing a well-rounded education that advocates and integrates visual arts curriculum to inspire creativity and reach all different learners.

TAEA is the leading advocate for the visual arts in the state. The organization has previously honored outstanding TAEA members for work in their classrooms and districts. This is the second year that TAEA is honoring districts that meet rigorous criteria as evidenced from data.

For the 2020 award, more than 1,000 districts were eligible to apply. Each district submitted documentation they met from the 12-point rubric over the 2019-2020 school year. Only 42 districts met the high standard and will receive the outstanding honor indicating they are in the top 4 percent of districts in the state.

“Grand Prairie ISD has set a high standard for visual arts advocacy, integrated visual arts curriculum, encouraged creativity and community participation,” said Stacia Gower, Chair of the Administration and Supervision Division of TAEA. “With the challenges educators faced this past school year it is a true testament to their skill, dedication, and flexibility that the quality of their programs continued strong and comprehensive.”

“We are extremely proud of our Fine Arts program in GPISD,” said Superintendent of Schools Linda Ellis. “Grand Prairie ISD has a long history of excellence in the fine arts and this award speaks to the dedication, passion, and creativity of our students and staff.”

Forty-two districts, including GPISD will be honored at the TAEA Administration & Supervision Division meeting as part of the TAEA Conference on November 21, 2020. The event will be held virtually this year.

About TAEA District of Distinction Award: District of Distinction is a fairly new award created by the Texas Art Education Association in 2019. The award honors school districts that are leading the way in the visual arts. The TAEA Administration and Supervision Division recognizes districts with outstanding leadership in promoting the arts in their district and community. The organization also looks at field experiences, community service, and community exhibitions to name a few as part of the rigorous rubric for the award.

About TAEA: TAEA is the largest state professional organization for art educators in the United States. It is the mission of TAEA to promote quality visual arts education through leadership, advocacy, service, and professional development.

The Foundation for Music Excellence has notified the Grand Prairie ISD that the Grand Prairie Fine Arts Academy Singers, under the direction of Joel Duarte and Candace Maughan, has been selected as a National Winner in the Mark of Excellence/National Choral Honors Project.

The Mark of Excellence is a competition, entered by recordings, and the top quarter are selected as National Winners. This year, 145 ensembles from across the nation, entered the competition. To date, the project has received entries from 38 states.

“This year’s entries were amazing, with stunning performances,” said Managing Director Rick Yancey. “These young students perform incredibly well, and that is a testament to their talent, training, and wonderful teachers.”

For more information, please contact Sam Buchmeyer, Public Information Officer, at sam.buchmeyer@gpisd.org or by phone at (972) 237-5380. 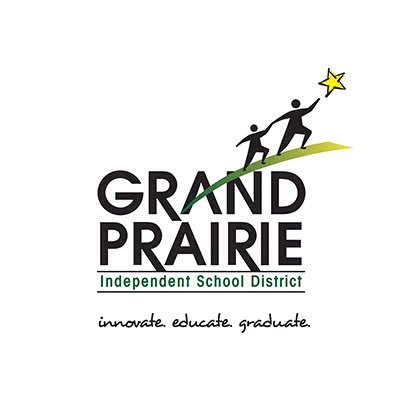 The overall tax rate is made up of two parts:

Including this year’s tax rate decrease, the GPISD Board of Trustees has lowered the tax rate by just over eight and a half cents over a two-year period.

At a called meeting Thursday night, the GPISD Board of Trustees voted to request a waiver from the Texas Education Agency in regard to virtual learning. As a result, the Grand Prairie ISD announced a plan for a two-step return to face-to-face instruction.

The decision to return in stages was based on recommendations and input from several sources:

After taking all of this into consideration, the Administration recommended the following plan for returning to in-person instruction:

For more information, please contact Sam Buchmeyer, Public Information Officer, at sam.buchmeyer@gpisd.org or by phone at (972) 237-5380.