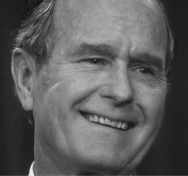 George Herbert Walker Bush, whose lone term as the 41st president of the United States ushered in the final days of the Cold War and perpetuated a family political dynasty that influenced American politics at both the national and state levels for decades, died Friday evening (November 30, 2018) in Houston. He was 94.

Bush was the last president to have served in the military during World War II and the last whose worldview had been shaped by the imperative to contain Communist expansionism.

Read more from The Houston Chronicle…

This entry was posted in National News. Bookmark the permalink.