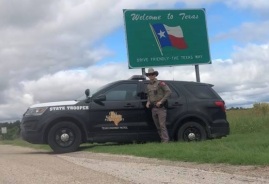 The Texas Highway Patrol is increasing enforcement of a state law about passing stopped police cars and other special vehicles. (Photo: Texas Department of Public Safety)

Texas Troopers are increasing enforcement of a state law about passing stopped police cars and other special vehicles in Harris and other counties.

The law, commonly known as Move Over/Slow Down, was passed in 2003 and the Texas Department of Public Safety (DPS) periodically focuses on its enforcement in different parts of the state.

The law requires motorists to move over or slow down when certain vehicles – including police, fire, EMS, Texas Department of Transportation vehicles and tow trucks – are stopped on the side of the road with emergency lights activated.

Specifically, the law states that a driver must vacate the lane closest to the applicable vehicles stopped on the side of the road if the roadway has multiple lanes traveling in the same direction.

This entry was posted in State News, Travel. Bookmark the permalink.