I was fortunate enough to score free tickets to see G. Love, Blues Traveler and moe. on August 10, 2019 at the Toyota Music Factory in Irving/Las Colinas. I had never been to this particular venue, so I was very curious about how such a large complex opened in a town with only 240,000 residents. Of course, with me being from Houston, I was used to the Toyota Center and the Cynthia Woods Mitchell Pavilion, both of which serve a population of close to 2.3 million people. 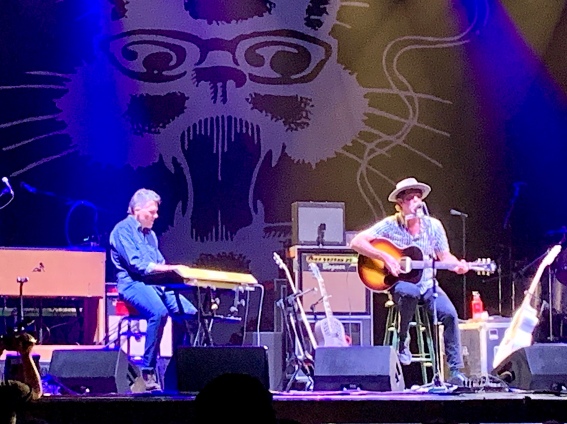 G. Love with the keyboardist from Blues Traveler

It turns out that there was a bond election in 2007, in which Irving/Las Colinas voters said “yes” to finance an entertainment center right off of State Highway 114, almost adjacent to the existing Irving/Las Colinas Convention Center and Hotel. The complex consists of about 210,000 square feet of retail and restaurant space, which includes an Alamo Draft House movie theater, several restaurants and retail shops and a bowling alley. Next to these retail facilties is a 65,000 square foot music venue called “The Pavilion at the Toyota Music Factory,” which can seat 4,000 people with its walls closed, and 8,000 people with everything open in “amphitheater [outdoor] mode.”

Originally scheduled to open as the “Irving Music Factory” on September 1, 2017, construction delays caused the opening to be postponed until September 9. The developers announced that the venue was being renamed the “Toyota Music Factory” and would feature Texas rockers ZZ Top as its inaugural concert.

The new venue has done extremely well, featuring mostly “classic rock” artists, such as Ringo Starr, Lindsey Buckingham and Lauryn Hill, to up-and-comers such as G. Love, to family-friendly shows such as Kidz Bop.

I found the facilities very easy to navigate, from the parking garage to the music venue. Once inside (the roof was closed due to extreme heat), there was plenty of room to walk around and peruse the booths that offered show merchandise, as well as food/drink areas, which offered the usual concert fare and beverages, along with some franchise outlets.

The venue itself offered excellent acoustics and plenty of leg room in the floor seats (I am 5’5″ and had no problems. My hubby is 6’6″ and only had minor difficulties). I don’t know how it sounds in amphitheater mode, but I’m looking forward to going back when the weather is a bit cooler.

There were plenty of helpful employees stationed about to direct us newbies when we got lost. The restrooms were placed at good intervals and there were several food and beverage stands placed conveniently around the rotunda.

All in all, we enjoyed the concert very much. We are looking forward to seeing other acts there, and would very much like to try out the amphitheater feature of the venue.

To learn more about the Toyota Music Factory and the talent line-up, visit https://toyotamusicfactory.com/.

This entry was posted in Entertainment, Irving, Music. Bookmark the permalink.