Texas cheerleader, 17, jumps off her homecoming parade float to save a choking toddler in the crowd

By JAMES GORDON FOR DAILYMAIL.COM

A high school cheerleader from Texas ended up springing into action at her homecoming parade in Rockwall after she spotted a toddler choking to death.

Tyra Winters, a 17-year-old student from Rockwall High School, near Dallas, explained how she was on the school’s float with her cheerleading squad and the football team when she heard murmurs that a child was choking in the crowd.

She scanned the spectators and manage to pick out a little boy whose face was turning ‘super, super red’, she told ABC News.

Within an instant, Tyra jumped off the float and ran towards the boy, who was with his mother, and performed the Heimlich maneuver.

Read more from the Daily Mail… 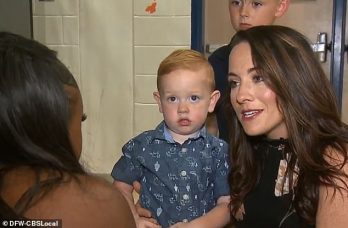 Tyra got to meet the little boy’s mom, Nicole Hornback, right, and Clarke to say ‘thank you’ (DFW-CBS Local)

The youngster, named Clarke, was able to breathe once again after Tyra’s actions for which his mother will be forever thankful (DFW-CBS Local)

This entry was posted in Child Safety, Every Day Heroes, Inspiration. Bookmark the permalink.