The North Texas Comic Book Show was held February 15 and 16 at the Irving Las Colinas Convention Center. This decade-old show caters to comic fans, superhero movie fans and Cosplayers [costume play] of all ages. I was fortunate enough to get a peek behind the scenes.

The Show featured the comic writers and artists that enable characters such as Spider-Man and Batman to come to life on the page, with many characters eventually making it onto the silver screen.

Attendees come to get autographs, buy comics and character-related merchandise and participate in the Cosplay contest, where they can win cash and prizes.

The electric enthusiasm was in the air, as “fanboys” and “fangirls” got to meet some of their childhood heroes.

“This is actually my first convention ever. It was a great experience,” said attendee James Gadsden. “There were a lot of friendly dealers. Even the other patrons were amazing, helping me out, pointing out deals.”

The Show is the brainchild of Chris Latshaw, who found himself dissatisfied with a comic convention he had attended as a dealer in 2011, and decided to start his own show.

I caught up with Chris and some friends in the VIP lunch room, where the comic celebrities and organizers came to grab a sandwich, a drink or just a much-needed break. 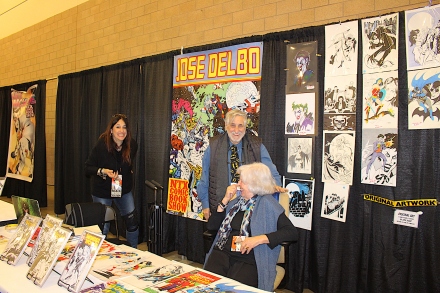 Jose Delbo clowning around with his family

“This show is my baby,” Latshaw said. “This year, we have the oldest living Batman artist, Joe Giella, who started back before Marvel Comics was even Marvel Comics. We have Jose Delbo, who is another artist who comes from a long time ago. He worked on both the Transformers as well as Wonder Woman and a Western Comic at one time called Billy the Kid. We have Bob Layton, who is famous for Iron Man and has been an integral part of what you see in the movies today. He developed a lot of [what you see on the screen] in the comics,” said Latshaw.

There were many artists, including both niche and well-known, who autographed comics and chatted with attendees.

One of the busiest booths housed Spider-Man artist Randy Emberlin, who is now retired from Marvel Comics. 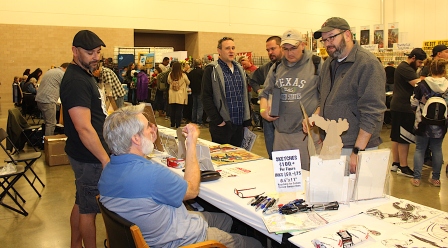 Randy Emberlin talks to attendees about his run at Marvel Comics

“I have been drawing since age four,” Emberlin said. “Comics actually taught me how to read, so I was reading at age four as well. I mostly drew stuff that was already in comic form back then. I still have a lot of my stuff from back then. They’re drawn in crayon and stapled to look like comics. It’s hilarious to look at now.

“I started inking Spider-Man at the end of 1988. I did it because Erik Larsen asked me to do it. I had met him years before, when he was a kid. He went to DC [Comics] and then to Marvel and then worked on the Spider-Man books. So, when he asked, I said, ‘I’ll take that hand-up any day!’ That was a book anybody would kill to work on,” Emberlin said.

Emberlin retired from Marvel in 2009 after 24 years of employment and now travels around the nation to comic shows and teaches drawing classes to local Portland students.

The other major offering at the Show was the Cosplay contest, which falls under the command of Jacob Long. “Cosplay is basically costume plus play [acting the character]. We just want people to have fun with it,” said Long.

“I came on board with this show in 2014. Cosplay is a natural extension of mainstream media, but it’s also an extension out of comics,” Long explained.

“There’s a community of about 6,000 Cosplayers, mostly based in North Texas,” Long told me. “We are all part of a community called North Texas Cosplay. I’ve been involved in Cosplay since 2012 and I am actively involved behind the scenes.”

The Cosplay contest was different from other contests in that the contestants did not have to be “pre-judged” to enter. Pre-judging in other competitions include minute attention to detail, which excluded many would-be participants.

The contest also emphasized the “theatrical” side of Cosplay. For example, if someone dressed up as Spider-Man, he/she would be judged on the look for the character plus how the contestant stayed in character behavior-wise.

Awards were handed out for best performance, best costume and best in show, which is a combination of both. The adults got cold, hard cash ($100 for first place, $50 for second and third place) and the winning kids got bags full of toys and other goodies. 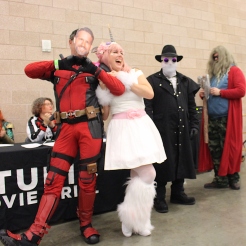 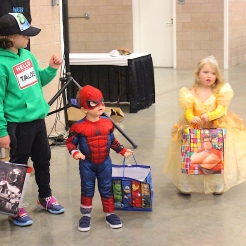 I was fortunate enough to be able to help out with the contest, directing participants to go to the proper photo spot so the Show photographer could record their appearance for posterity.

The Show is held twice a year in February and July. For more information, visit https://www.comicbooksdallas.com/.

This entry was posted in Entertainment, Family-Friendly Activities, Irving. Bookmark the permalink.