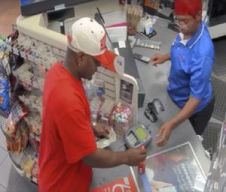 The suspect appeared to use his shirt when opening the door to the business. The suspect grabbed a Coke and approached the cashier to pay. When the cashier opened the register, the suspect pulled a black semi-automatic pistol out of his pants, pointed it at the cashier and demanded cash.

When the suspect left, he told the cashier to go to the restroom, located in the back of the store. The suspect fled, and no vehicle was seen.

Anyone with information about this suspect is urged to call the Pearland Police Department at 281-997-4100.

On Tuesday (March 1) at approximately 7:05 p.m., a Pearland Police officer was flagged down in the area of Orange St. and Mykawa regarding a black Chevrolet Impala.

The citizen reported that he had witnessed occupants of the Impala committing a burglary of another vehicle in the 3300 block of Cactus Heights. The citizen followed the Impala.

As the Impala traveled north on Mykawa, the passenger reportedly stood up through the sunroof of the car and fired two rounds at the witness, one round grazing him.

The Impala was located on Mykawa and police initiated a pursuit. The Impala crashed on Mykawa, just north of Beltway 8. After a short foot chase the passenger, a 16-year-old male juvenile, was detained. The driver was not located.

The witness was treated for minor injuries. The juvenile was charged with attempted murder and multiple counts of burglary of a motor vehicle. The case remains under investigation.

On Saturday (Jan. 30) at approximately 5:50 p.m., Pearland Police were dispatched to a report of a Robbery in Progress at the Subway located in the 2700 block of E. Broadway.  Police were advised that two males fled eastbound in a white Dodge Challenger.

Officers located the suspect traveling eastbound near the 1100 block of E. Broadway. The suspects ran from the vehicle as officers approached. One suspect was taken into custody. A perimeter was established in the area to attempt to locate the second suspect.

After a search of the area, and with the assistance of the Houston Police Department’s helicopter unit, K9 unit and Friendswood Police Department’s K9 unit, the second suspect was taken into custody in the area of the 2700 block of Janet St. at approximately 7:13 p.m.

Michael “Tony” LaSagna retired after 26 years of service with the Pearland Police Department on Friday (Jan. 29). Officer LaSagna’s service was distinguished by his being a ‘steady hand’ for the department.

According to Chief J.C. Doyle, “Tony is every Chief’s dream. He came to work when he was supposed to, did his job and always went home at the end of his shift. Tony was a mentor and friend to many and will be missed.”

LaSagna will begin a new career with the Lake Jackson Police Department. When asked to give a speech, he said, “On behalf of my wife and kids, I appreciate everything this department has done for me. Never in my life did I think I’d be here more than 10 years. I appreciate everyone celebrating this day with me!”

Police were called to the bar in the 2400 block of Broadway Ave. at 1:15 a.m. Police say Kafer had an altercation with John Henry Allen, also 20, when Allen stabbed him multiple times.

A witness helped Kafer’s roommate transport Kafer, who was already unconscious, to the hospital, where he passed away.

According to police, Allen claims that several males, including Kafer, started yelling at him as he sat in his car with a passenger in front of an ATM machine next to the bar. He says one of the men reached in and punched him in the face. Allen then started swinging a knife out the window at the men.

Police say that Allen confessed to the stabbing, and a knife believed to be the murder weapon was recovered in his vehicle.

Police arrested Allen at his nearby apartment. He is being held in the Lubbock County Detention Center with a $500,000 bond.

NIX: Some Pearland ISD school bond history is in order

When discussing the questions of a possible school bond election next November, I suggest readers consider what happened in 2006 when Pearland voters approved roughly $115.6 million in school bonds.

In a district press release issued a month before the election, officials told voters projections showed enrollment was expected to reach 28,600 by 2014. Voters were also told the bond would fund a new high school and two new elementary schools, among other things.

Currently, Pearland ISD enrollment is roughly 21,115, more than 7,400 fewer students than projected. And although the bond provided construction funding for Dawson High School which opened in 2009, elementary schools twelve and thirteen were never built. Why? I don’t know but I’d guess these are questions voters and trustees may soon be asking.

Another question to consider: only six years after it opened Dawson High School is now the district’s most overcrowded campus. Why? I don’t know but what I do know is PBK Architecture, a firm that was involved in the construction of Dawson High School, last year agreed to pay Allen ISD millions in damages for their part in structural defects that led to the year-long closure of the district’s new $60 million high school stadium. Yet just last month, administrators gave PBK Architecture a perfect score on bid tally sheets and advised trustees to again hire the company on an “as-needed” basis.

According to the 2015 financial audit, the district’s total long-term debt equals approximately $356.1 million, or roughly $16,822 per student. Do we need to add to that number? At this stage, that’s a question to be carefully considered by members of the Long Range Facilities Planning Community Committee and later, by trustees. Let me be clear, I have great respect for every one of the Pearland ISD trustees. They each work tirelessly on behalf of Pearland students and I have no doubt they will carefully consider all these questions and many others before allowing a bond proposal to come before voters.

And in covering this process, it’s not my intent to tell anyone whether they should vote for or against a bond proposal. My intention is provide accurate information and uncover the facts as they are made available via public meetings, agenda documents and other official reports. Readers deserve to have accurate information during every step of the process.

Posted in Pearland Journal, PISD, PISD Board of Trustees, Uncategorized

By Stacey Glaesmann and Kristi Nix

The Pearland community lost a promising young man Tuesday (Jan. 12). Joshua Gray, a junior at Dawson High School, was rushed to the hospital after experiencing severe stomach pains. He was in emergency surgery when he passed away.

Gray was an advanced student and was active on the golf team.

Dawson High School counselors are available for students who need to process this loss.

A GoFundMe account has been set up in Gray’s memory. “Josh and his family have been a source of comfort for so many people so many times. Please flood them with your prayers and give what you can,” it reads. To donate, visit https://www.gofundme.com/5xutgbvn.

The City of Pearland held the Grand Opening and ribbon cutting ceremony for the new Fire Station #3, located at 3207 Yost Rd, on Saturday (Jan. 9). City leaders, Fire and Police Department employees and members of the community came out to enjoy the food, tour the facility and get a close-up look at the equipment.

The single-story station is designed to support up to 10 full-time staff members, with two pumper trucks, one ladder truck, one rescue truck and two ambulances. Employees at this station will provide fire and rescue response, emergency medical response and fire inspections.

“He’s still in Pearland,” said Mayor Reid. “And like good memories, it’s important we keep good people in the community.”

“He’s been here through all the transitions,” said Assistant Chief Daniel Baum. “Originally, the old Pearland EMS was all volunteers and part-time employees. In 2005, it turned into a department with a mixture of full-time and part-time employees and then it transitioned to the Fire Department. He’s been here the whole time, providing medical guidance.”

City Manager Clay Pearson congratulated Bui as well. “I’m proud to be here, not only for the dedication of this building, but for the recognition and promotions of some of the people that serve in this facility in the important role of public service,” he said.

Firefighters David Tilbury and Josiah Csiki were promoted to Driver/Operators. Tillbury joined the Department in June 2014. Csiki joined in March 2015. Both were pinned by their wives.

City Secretary Young Lorfing swore the employees in to their new position.

After the promotions, City leaders “uncoupled the hose,” declaring the Station open for business. The building also got a “wetdown” from two pumper trucks, which is a tradition when opening a new fire station.

On Friday (Jan. 8) at approximately 12:50 a.m., Pearland Police were dispatched to a report of shots fired at the Villas of Shadow Creek Apartments in the 2000 block of Business Center.

Upon arrival, the responding officer found a 32-year-old male victim with a gunshot wound to the left thigh. The victim stated that two or three subjects wearing ski masks riding in a dark black or blue vehicle, possibly a Honda, had pulled up to him outside his apartment and began shooting at him.

Officers canvassed the area but were unable to locate the suspects. The victim was transported to Memorial Hermann Hospital with non-life threatening injuries. No motive was immediately apparent for the shooting.

The investigation is ongoing.

The Pearland Police Department promoted two of its officers to the rank of Sergeant on Wednesday (Dec. 13). Det. Jeff Jernigan and Officer Adam Carroll took their oaths as other officers, family and friends looked on.

Jernigan had been named the 2014 Exchange Club Officer of the Year. He was pinned by his wife Katy. His children Shane and Lexee were in attendance.

Carroll was part of the Motorcycle Unit and a past president of the Pearland Police Officer’s Association. He was pinned by his children, Rylie and Zach.