EDITOR’S CORNER: Spinning the Wheel on the US Financial Structure System

Like a lot of folks, I like to play games on my phone/tablet. It’s great entertainment when I’m waiting somewhere. It’s also a nice way to “wake up my brain” in the morning, or to just take a break from work/housework.

One of the games I play is a slot game called, “Hit it Rich!”

I got to thinking about how this game mirrors society a bit. When I first started out, the game gave me $3 million, so when I talk about millions, billions and trillions, I’m representing millions as “lower class,” billions as “middle class” and trillions as “upper class,” as far as financial standards in the US go. Yes, there are players that go beyond that in winnings, which would be “the rich upper class.”

When I started playing the slot game, I liked it because it is pretty mindless. It’s a great game to play when I didn’t want to think too much, like I have to with puzzle games and such. It has a feature that gives me extra money as long as I log in every day and spin the bonus wheel. I can request extra coins and free spins from friends, as well as gift to them.

With my initial $3 million, I tended to alternate getting up to $10 million or so or going completely bankrupt. Fortunately, when bankrupt, I logged into the game app every day and spun the wheel to build up enough winnings to play again. It took me several days to get that “baseline” of $3 million back, but eventually I’d reach that goal and be able to spin again.

Now, here are the parallels, which are completely my opinions.

I’m about to talk about federal assistance. I just want to clarify up front that I will be referring to folks who use the system honestly because they really need it, whether temporarily or more long-term. My mother is one of those people, and we are thankful that the system exists and can help her, which helps me, as I’m the only child (and definitely not financially rich).

I looked at those free spins when I was bankrupt as federal assistance and/or a job. I used it honestly, and built up enough money to “live” on (i.e. be able to spin/play). I did not spin until I had that $3 million back, though I easily could have. Of course, some people who depend on federal assistance (including my mom) have to “spin.” They need food, clothing and shelter. Ideally, the bonus wheel spins that they take advantage of every day would represent a job. But it could represent unemployment or just checking the mail every day for the assistance check or volunteering for a cause that is important to that person.

Of course, many people in this country are honestly disabled, so they may not be able to spin at all and rely on collecting the free bonus every day when they login. But the fact that they take the time to login every single day shows perseverance and initiative. The people who skip days or weeks of bonus spins or just keep requesting coins from friends are obviously not committed to the game.

I was playing along in this pattern of “millions to bankrupt” for a long time. I even gave up playing for a while, but I still collected those bonus spins just in case I ever wanted to play again.

Over time, I accumulated a few billion dollars. I could bet higher and, in turn, my wins tended to be worth more. So I was spending more, but my returns were higher. This is not always the case with the middle class. Of course, one hopes to secure a good-paying job so that they can afford to “bet” more (i.e. have some disposable income to enjoy some “luxury” items/activities) now and then. But these days, it is costing us more for “necessities,” such as food, electric service, rent/mortgage, etc. In many instances, the middle class is just able to pay the bills for a lifestyle that takes care of these necessities and that’s about it.

Of course, there are many, many Americans who live beyond their means and “rob Peter to pay Paul.” I liken this to players who actually buy extra coins, spins, etc. with real money. I realize that these are the folks that keep the game available to me for free (along with the inevitable ads) and allow the game company to update and change it from time to time. They are a big source of revenue for the game “economy.”

With my few billion dollars, I started betting higher, and one day, I hit a jackpot! I went from $1 billion or so to $36 trillion…just like that. And guess what? I started getting showered with rewards! I could move up a level in two spins! And each time I moved up, I got a bonus of at least $4 billion. 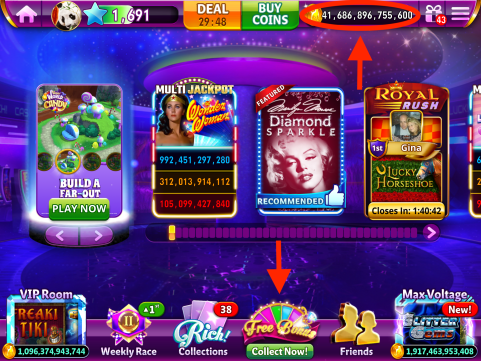 I don’t need those bonus things. I can bet $20 billion on a spin like it’s nothing. I give coins and free spins to all of my friends that request it. I’m not the one who needs the extras. The “millionaires” do.

Of course, one could make the argument that maybe the millionaires aren’t managing their money well or are not being thrifty or are not using all the resources that the game provides. And I’m sure this is true with many players. But what about the millionaires that are doing everything “right,” but just haven’t hit a jackpot like I did?

I’m sure I don’t have to point out the parallels here. The rich are getting richer, and they get so many perks and free stuff…yet they’re the ones who can afford that stuff if they wanted it!

Why does a rock star get a free meal at a restaurant and regular patrons don’t? It’s bass-ackwards to me. Mr. Leather Pants could afford to buy every patron in the whole restaurant a nice meal, yet his is free? How is that logical?

I know, I know…it makes Leather Pants come back to said eatery and thus attracts his fans, etc. to the establishment. I get the PR/economics of this. I just think it’s stupid.

While Leather Pants makes millions for dropping one album and touring for three months, regular folks are living paycheck to paycheck. I always thought that if I were talented enough to be a pro sports figure, a singer or actress, I’d do a couple of movies/albums/seasons and then retire. I mean, how much money does one really need – or better yet, how much money is one able to spend in a lifetime?

Sure, I could spend $50 billion (real life) dollars before I die, but it would probably be tough. If you doubt me, try this exercise:

Let me know how you do! This is what the rich upper class deals with daily. Sure, they own companies and invest in stuff and give money to charity. But if you try the above exercise, you can see it’s a drop in the bucket.

The bottom line is that, in my opinion, the benefits to the lower, middle and upper classes are upside-down. My little $3 million in the slot game is a distant memory. I am LOADED RICH, baby! But does that make the game more fun? Not. At. All.

This entry was posted in Editor's Corner, Opinion. Bookmark the permalink.