How Many Flat Tires Are Worth an Officer’s Life? 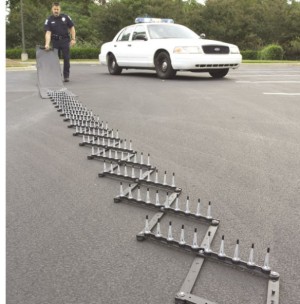 Since the development of the tire deployment device (TDD), not a year has passed without the loss or serious injury of officers involved with their use—be it preparing for deployment, executing deployment, or post-deployment retrieval. Already, after just four months, 2020 has proven to be no different. These tragedies should make us rethink how we end high speed chases. Before diving into this subject, I will admit that in my younger years I, too, placed myself in some “risky” situations while deploying TDDs. If the suspect’s vehicle had swerved one way or another, I most likely would have become another statistic. I was lucky.

Since 2000, an alarming number of officers have been killed during TDD-related incidents. Of those, over half were killed during some step of employing the devices on an interstate or state highway. In many cases, the suspect’s vehicle was traveling at very high speed, with one documented case of two female suspects traveling in excess of 140 M.P.H. when they struck and killed two police officers in Tennessee.

The risks of TDDs are inherently obvious and steps to mitigate those risks vary; from restricting use to complete prohibition. Cincinnati Police Department implemented a restrictive route after a young sergeant was hit by a pickup truck that was struck by a vehicle driven by a suspect who was high on heroin and fleeing police. The sergeant was in a coma for more than a week and sustained multiple serious injuries including a traumatic brain injury, a broken skull, fractured neck and a dissected carotid artery. He spent a year in a rehab center and ultimately took a medical disability retirement from the department.

The Dallas Police Department chose a more preemptive course of action, completely banning the use of TDDs several years ago. Although at the time of the decision, no Dallas officers had been injured or killed using the devices, but then Assistant Chief Mike Genovesi said, “It’s an officer safety issue. In a perfect world, they can be effective, but I have seen too many instances where the reality we live in is far from that. There’s a lot of danger, a lot of safety issues with them.”

Regardless of the chosen policy, I’m sure we can all agree on one thing. If your officers are given the option to use TDDs, they MUST be trained. That leads to the core question: How much training do we actually conduct on proper TDD deployment? In fact, how much training do we conduct—period—in a profession with so much risk?

While researching this article, I reviewed an instructor’s manual from a popular TDD manufacturer. The manual discusses how to deploy the device and even recommends having “all participants go to a controlled area (i.e., parking lot, large room, etc.) to demonstrate their proficiency in safely deploying…”

Herein lies the problem with not just TDDs, but the majority of our high risk/low frequency tasks in law enforcement. Out of the 30 officers killed in the last 20 years deploying TDDs, none of them were killed in a parking lot with no traffic, and certainly none were killed in a large room.

Are we failing our officers? You bet!

How many times have you heard an administrator, politician, community activist, or member of the media comment on the need to change law enforcement training? Yet, what’s our response? Making virtually no changes that will have a significant impact on the safety and lives of our officers. Of course, I admit there are certainly exceptions to this. However, when you look at our profession from a 30,000-foot view, what are we doing to combat the true risks our officers face on the streets? Are we incorporating reality and appropriate levels of stress into our training curriculums? Having officers deploy TDDs in a large room or a vacant parking lot will only contribute to the problem. These unrealistic settings will not prepare them to deal with the sudden onset of acute stress – which is exactly what occurs during a high-speed pursuit.

Many agencies have been using PIT maneuvers and rolling roadblocks for decades. However, in some departments these actions are prohibited and violate policy. Why would we allow officers to chase a suspect for miles and miles when a properly performed PIT maneuver could end the threat almost immediately? Liability? Fear of damage to a police cruiser and replacing a bumper? Seriously?

This is the issue. As leaders, we have to change the way we think. (By the way, for those of you utilizing the PIT and/or rolling roadblocks, kudos)! The cost to replace a bumper or fix damage to a police car is nothing compared to burying a police officer.

Legislative changes need to be enacted in parts of the country that make fleeing from the police – regardless of the crime, distance, speed, or suspect’s past – a crime that immediately results in mandatory prison time. Send a message to those who flee: your actions will make jail time certain.

If you are going to continue utilizing TDDs, here are some tips and reminders on do’s and don’ts for deployment:

Fortunately, the overwhelming majority of TDD deployments are successful and officers take the violators into custody. Therefore, TDDs will most likely continue to be a tool utilized by many law enforcement agencies. Technology is also improving and new tools are being developed to assist law enforcement in apprehending fleeing vehicles. From GPS tracking darts to remote controlled TDDs, we are making improvements in ways to successfully end high speed chases.

A fellow chief who I hold in high regard shared one of the most profound statements I’ve heard in my career:

“Risk is baked into the cake of law enforcement.”

That simple observation stuck with me. We’ve all chosen to eat the cake. It’s what we do. But the deeper you bite in, the more risk you choose to accept. I’m not saying that’s a bad decision. It’s not. But it’s a decision we need to make wisely and with great planning.

The key is training. If you choose to prohibit the use of TDDs, I respect and understand that decision. If you choose to continue to allow your officers the option of using TDDs, then train them! Train them WELL, while seriously considering steps you can take as an administrator to mitigate the risks they may not fully consider in real-time in the field.

Be safe, be smart, be successful!

This entry was posted in National News, Police News, Safety. Bookmark the permalink.