Is Italian grocery and eatery Eataly cooking up a Dallas entry? 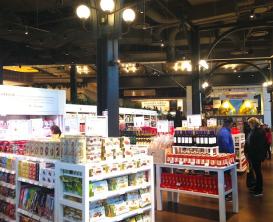 Eataly’s Las Vegas location is the most recent to open in the U.S. It’s located at the entrance of the Park MGM Hotel. (Steve Brown /Dallas Morning News )

Eataly, a hybrid grocery and restaurant concept created in Italy in 2007 and now in 37 locations around the world, appears to have taken a formal step into Texas.

Eataly Dallas LLC was created in Delaware last month, a move first reported by D Magazine. Eataly has only six stores in the U.S. in New York, Boston, Chicago, Los Angeles and most recently Las Vegas.

Read more from The Dallas News…

This entry was posted in Dallas News, Food and Wine. Bookmark the permalink.